Our diaspora* community volunteers are back from a crazy time at FOSDEM. The weekend featured a lot of talking about diaspora* and the free federated social web in general, a lot of fun, quite a lot of beer, and not a lot of sleep! Augier kindly composed a video of the action.

Jason Robinson picks up the story …

Quickly spotting our table between the #FSFE and #ownCloud, we pushed up the diaspora* flag and spread out the stickers and flyers. People instantly started stopping by, picking up stickers, reading the flyer and asking questions. It was insane! We didn't have any time to do the hacking we were planning on: our laptops quickly became demo screens to show off the diaspora* UI. I barely even had time to drink the coffee that Lukas sneaked away to buy at some point. When I finally remembered to take a few pictures, it was a few hours before I had chance to post them online.

Fla arrived quite soon to help answer the flood of questions relating to diaspora* and, later on, we were joined by Lukas @Zauberstuhl, Steffen van Bergerem, Augier and dada. The whole day was spent at the diaspora* table talking to people, giving interviews, meeting other projects and drinking beer. What could be more awesome than this? :) 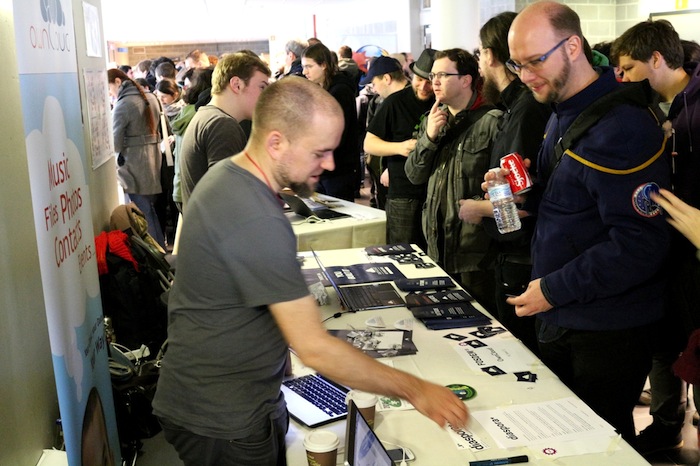 I was really surprised by how many people wanted to talk about diaspora*. Being here, talking to people, really pushed up my faith in the project. The #internet really needs projects like this! We are important! This was the message I heard over and over again. Also the team was beefed up by Pavithran S, Benoît Majerus and Pablo Cúbico (who also gave a talk on open UX design).

The interest in diaspora*

What was interesting to me was what kind of interest people had for diaspora*. I half-expected it to be mostly people walking by and the ones who do come to talk to be all “didn't diaspora* fail already?” This was not the case. I guess the people who stopped at the table and that I talked to could be categorised roughly as follows:

The future of (federated social) web

It's important to note that while we were representing diaspora* directly, open source in general is a very collaborative field. People (in my sense at least) then to be very supportive and collaborative towards other projects - ones that are even direct competitors. When you are doing something for the love of doing it, you cannot IMHO have direct hostility to other people who are also doing something out of love for something, even if it is a "competitor."

Thus a lot of the people I spoke to I mentioned the ongoing #W3C SocialWG work to create a standard to integrate social web via a common protocol and API. It did surprise me that even many people deeply into social applications had not heard of this, but it did raise many interesting discussions and everyone agreed that it is something that could be a major unifying component for the social web.

After all, people just want to talk to each other - they shouldn't care what software the other person uses. Federated social web can be compared to email. If I want to contact a person and I know their address, I don't need to think about what software they use; I just send them a message. That is how the social web should work.

The W3C led group is currently working on the draft of the social API. It will be really awesome once this work finishes, and hopefully it will be widely adopted. This is the way we create a social web – not through centralized sites like #Facebook or #Twitter.

Maybe at FOSDEM next year we could attempt to organize a Social web room. Who is with us to apply for this? We could try to have someone from the W3C working group attend for a talk too.

See you at FOSDEM next year! Was especially nice to meet some of the other contribs and users in our community. You're all awesome!

You can see photos of the event taken by Jason, Augier and dada.

Several interviews were made, two of which have been released and can be found here.